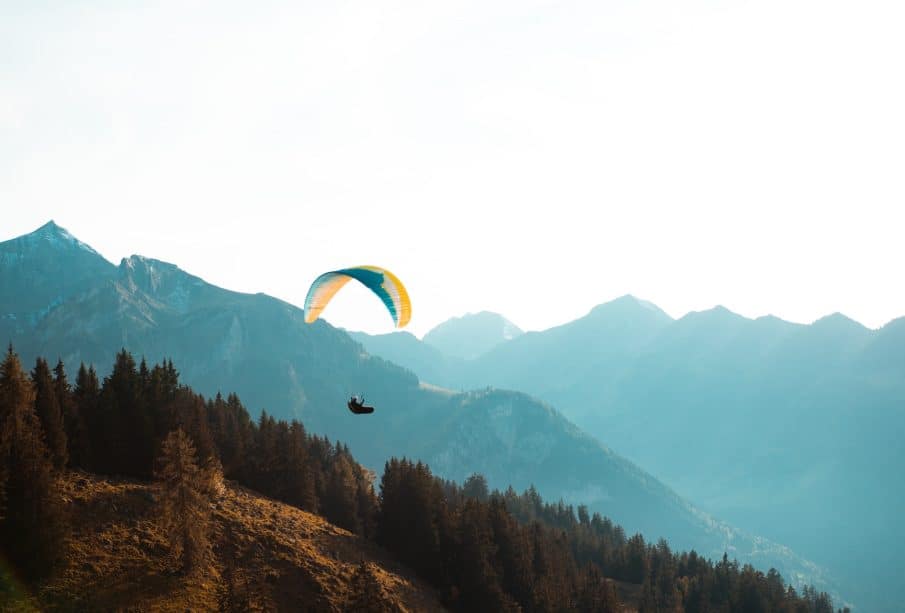 Paraglider, paramotor, or perhaps… motor-paraglider? All three only on the surface are very similar to each other, but in reality they differ, and in more than one respect. Here are the differences you need to know about!

The differences that exist between a paraglider, a paramotor, and a motor-paraglider begin at the level of construction, and consequently also the takeoff of each of these three flying machines. To understand how they work, we’ll take a look at the load-bearing element, and note – it’s not a wing in all cases.

A paraglider has a soft wing, made of special fabric, which makes flight possible at all – so it is the load-bearing element. Links are attached to the wing, with risers connected in two places to the pilot’s harness. The design allows the machine to be controlled and to maintain the proper, and therefore lobed, shape of the wing. In the case of a paraglider, we have two options for takeoff: foot launch (from a slope with the right slope) or takeoff by winch (towing with the help of a car or quad).

The construction and takeoff of the flight are definitely different already in a motorglider. The machine also has a wing, which, however, is no longer a load-bearing element, although it plays another significant role. After all, it is to it that the tricycle equipped with one or two seats is attached. In the crucial process of soaring into the air, the triangle-like wing, on the other hand, effectively takes the place of the mounted propulsion engine.

The motoparaglider – as its name may suggest – is a kind of combination of the construction of the paragliders and motorgliders discussed above. Two already proven methods have been used, so the machine has both a wing in the shape of a paraglider-like airfoil, and a trike or seat with a propulsion engine like a motorglider.

Due to the different characteristics of the wing and the motor, paraglider flight differs from that of a motorized or powered paraglider in terms of the time spent in the air. Machines equipped with a propulsion engine, in theory, allow you to enjoy the views for longer – amateur flights usually last about 20-30 minutes. However, a paraglider controlled by a good pilot in favorable weather conditions does not fare any worse. Such a flight can last up to several hours!

Regardless of which of these flying machines you ultimately decide on, one thing is certain – you will have an unforgettable experience during the flight. It is the sensations that are the key element of this activity. While admiring the beautiful views from a skyward perspective, aspects related to the construction or takeoff of the flight recede into the background. After all, what is technical information compared to the opportunity to at least momentarily take to the skies and forget about mundane problems?

What should a training plan for a mountain ultramarathon look like? Take